Jessica Sorensen, The Temptation of Lila and Ethan

ARC via NetGalley in exchange for an honest review. You can also find this and check out my Goodreads here. 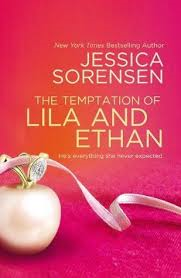 Despite a few other books I have read by Jessica Sorensen, I thoroughly enjoyed Lila and Ethan’s story much more. I also didn’t know that this was part of her Micha and Ella series but now that I have read the first book in that series I still have to say I loved Lila and Ethan’s more as well. Sorensen’s other books feel too immature compares to this one, maybe because there is a deeper concept in this book or the characters had bigger issues to deal with.

Lila and Ethan are total opposites, coming from different parts of the US, different backgrounds and homes, just different personalities in general. I heard that they kicked off as close friend in the Micha and Ella stories and I could see why.

Lila has been thrown into the world of perfection by her parents, everything about her is either perfect or on the road to being perfected despite Lila’s want to be herself. Her parents don’t care about her wants or needs so she leads her life into sex and drugs. Ethan was always there to pick her up when she has had a bad night or doesn’t have a clue where she woke up. He was her affection in a way since she couldn’t get an ounce of it from her family.

Ethan grew up in a domestic violence scene and had it locked in his head that he wanted to be nothing like his father. He grew up and met a girl, London. But that relationship went haywire, leaving Ethan with a broken heart and too much guilt that led him to sex and absolutely no relationships ever again.

Now this is where things began to get tricky. Two people who only want sex but cannot do that to one another. Because they secretly want a relationship with one another as well. Oh my goodness did this anger me! Their sexual tension is all over the place and they know it. However why ruin a perfectly great friendship over pleasure for one night?

Throughout the book I just wanted one little kiss between them. Sure they got close but that was teasing them and me. Though I didn’t get what I wanted right away I adored their friendly banter, arguments, teasing and private jokes.  But that seemed to just keep their secrets away from each other and I desperately wanted to find out what is was. When Ethan does find out about Lila, she goes on a rampage and the only one to help her fix herself and her past ways is Ethan.

Oh I loved watching Ethan transform in her knight in shining armor and neither of them really noticed it until it was right in front of them and they had no choice but to come up front with their feelings. This was when their emotions were raw and there was no turning back.

Overall this book was a tease and I liked that enough to give it 4 teasing stars and am anticipating a sequel??? (Please let there be a sequel) Thank you NetGalley and to the publishers for the read and thank you readers for reading! I will have another post up soon,